This is the fourth in my series recapping Waiting 2018, a series of Spirit-led meetings which were held in Parker City, Indiana, on March 10th and 11th.   To begin with the first post in the series, click here.

Continuing with my recap of the Sunday morning gathering…

The meeting Sunday morning started at 9:00 AM and finished up at 1:30 PM...so it lasted four-and-a-half hours. I know most people would be aghast at a church meeting that lasted that long, but...believe me...it didn’t seem that long at all! When the Spirit of God is really manifested Himself among His people, time just seems to fly by. I’ve been to many...MANY...church meetings that lasted an hour-and-a-half that seems FAR longer than this meeting...because there was no life in them. There was KINGDOM LIFE in these meetings...and it makes all the difference.

(I hope, for those of you who haven’t attended one of these Waitings, that these accounts will make you want to come the next time one is announced. You don’t have to be a part of any certain church...If you are a member of the body of Christ...just come! You won’t regret it! If you would like to be notified when another meeting is announced, then just "Like" Parker City Christ Fellowship or Fair Haven Christ Fellowship (the church that I'm from) on Facebook. Both of these churches will make the announcement on Facebook when the time comes. You can also email me at waynenalljr@gmail.com, and I’ll be glad to let you know.)

Soon after Pastor Jerry Keller’s wonderful message, Pastor Aaron announced that we would be taking up an offering and that Parker City would be keeping none of it. Every penny was going to go to an incredible ministry called Coda Mountain Academy in West Virginia, which is headed up by Pastor Robert Morey’s wife, Esther. There just couldn’t have been a better place for this money to go.

Sister Esther was gracious to share with me briefly some of her experiences in founding Coda, and to explain just what it is:

The last 18 years of our 35-year ministry in Fayette County, WV has been focused on youth. There have been surprising turns all along – but none as much as the day the Lord told a homeschool mom (yours truly) who was prejudiced against the public school and who did not have a teaching degree that she would teaching at Fayetteville High School someday. This is not the time or place to tell that story – but the short story is that God miraculously opened that door for me/us to do just that, AND even greater, God baptized me in love for the public-school kids, teachers, service personnel and administration. We started with 27 children but the program has grown to three schools and 250 – 300 children any given semester. Summer camps and adult programs have also been blessed with the breath of God’s presence and favor, allowing us to reach about 200 more youth and adults. I’m saying all this to say that God has been taking us out of the salt shaker and into the world in ways that we did NOT EXPECT! (Sometimes my head was confused about God pulling our focus so far outside the church walls and creating a ministry (Coda Mountain Academy) on things like violins, guitars, Lego robotics, art, cooking etc. However confused my head (and sometimes my church) was, our hearts were COMPELLED to go forward. The work is overwhelming and all-consuming at times…and as you might imagine…funding to sustain everything a grueling and constant uphill climb. But the impact on Fayette County has been breathtaking and glorious!The joy of this has kept us steady in the hard times.

At the morning meeting, right before the offering was taken, she shared her thoughts about just how much it has meant to have us partner with them. Some of the things she shared that morning were:
After she finished speaking, Pastor Aaron said, “My heart is so stirred) I don’t have the words! We love you! You are not alone!” (You can watch how this whole thing unfolded in the first video below...the offering announcement is in the second video.) Pastor Aaron prayed over the offering, thanking Jesus for the privilege of using us as a body being able to sew into this ministry. 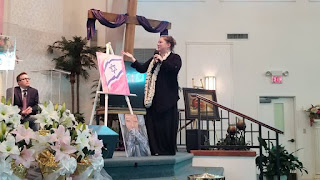 Elizabeth Doss sang a stirring “Anthem of Praise” as we took the offertory  (She also shared with us in another part of the meeting about the beautiful "Israeli Flag" painting that she made during the meeting.)  Pastor Aaron brought his wife Missy up to present the check to the Morey’s. When he announced the amount...over $8000...they were just blown away! (This was an amazing offering from a relatively small group of people...Jesus was putting it into people’s hearts to be so very generous!) Sister Esther shared with me her reaction to the offering as well as the prayer for their physical health and other needs:

Toward the end of the last meeting Pastor Aaron had a leading to take up an offering for Robert and I and the work we do in Fayette County. This was a blessed surprise! While the offering was being counted, a particularly specific and precious ministry of prayer into our lives, work and health occurred through the obedience of Molly, Taylor and Lori and others. (We had experienced some damage to our health from natural gas and carbon monoxide exposure recently. We hadn’t mentioned it to hardly anyone, but the Lord knew and ferreted it out. There has been evidence of God’s answer since then!) What that meant to us – and the sacredness of those moments – would be hard to ever explain. If that wasn’t glorious enough, the offering amount was announced we still haven’t recovered. $8,536.85. Can you believe the grace, favor, obedience and sacrifice wrapped in the love of God that this represents? Oh – and then Britny (Nall), another young woman of God who shares our burden, came to me in her wheelchair with a handful of change in her lap. I put this change in a special place to be used as the Lord directs. 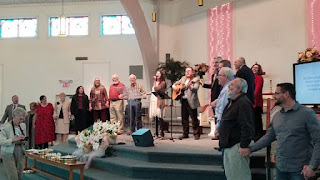 God is expanding their ministry, and they needed every penny of this and so much more...If there is anyone reading this who are touched by this wonderful ministry to underprivileged children in West Virginia and are looking for a place to invest their resources, I would encourage you to pray for them and go to their website and donate to Coda...There is no place on earth that your money would be used for anything more worthy than this ministry!  (Click here to check out their ministry and to donate.  You can also click here for their Facebook page)

Pastor Taylor Keller ended this time with a rousing prayer over the Morey’s and their ministry. At the close of the meeting, we all gathered around in a big circle and, with Pastor Taylor and Molly’s leadership, we just praised the Lord for some time.

Pastor Aaron shared that the meeting would end officially then, but that he felt that many of us would be staying and fellowshipping with one another until 4:00.

It seems that there is far more that I left out in these brief “recaps” than I included. Many kingdom moments occurred in the meetings and outside of the meetings that are just as precious and eventful as the few that I’ve shared here. If your “moment” was left out of this report, please forgive me. 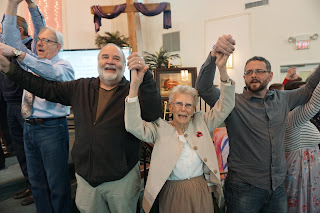 Several were able to share with me their thoughts about the meetings overall. Here are a couple of them:

Waiting 2018 - much joy, worship, peace, love, laughter & truth; communion of Christ & with one another. All in copious amounts. Pastor Kim Gilbert

It was great to see old friends, meet new ones and worship together. Dennis Begeman

Towards the end of the final meeting, the Lord put it on my heart to just go up and hug certain men and tell them that I appreciate and love them, which I did. They were Pastor Robert Morey, James Doss, Pastor Jerry Keller, Pastor Kim Gilbert, and (later during our fellowship tiime) Pastor Nicky Farmer. It wasn’t until I was reflecting on the meetings later that evening that I realized that these men were all from different churches which were represented there. It made me realize even more that the Lord is truly wanting to bring us all together in love.

I shared with our congregation at Fair Haven last Sunday a message about wisdom, which I spoke especially to our young people. During that message, I shared with them one of the things that God has put on my heart, which I feel impressed to share here in closing. “Love is the lubricant that allows wisdom to be imparted from one generation to the next.” A car can’t run without lubricant. The body of Christ can’t run without the lubricant (or oil) of love. It is love for one another that makes everything work well in the body of Christ. It is love...Agape love...self-sacrifical love...that we are called to display to one another and to the world around us. At Waiting 2018, we loved one another...LET’S NOT STOP!

Want to read more?  Here are links to a few other articles on this  blog:


I Went To A Town Hall Meeting...And God Showed Up!
The New Evangelism...(Reimar Schultze)
The Question That Led To The Prayer...My Day at the Statehouse...