The Charleston Tragedy: Racism, Gun Control...And The Power of Forgiveness! 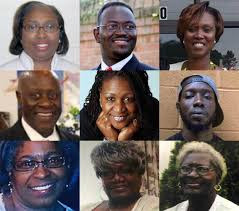 I like almost all Americans was horrified when I woke up Thursday to hear of the senseless killing of nine members of a historically black church during a Wednesday evening bible study in Charleston, South Carolina.  The young man, who has since been caught and has confessed to the killings, is obviously a virulent racist, as the photos and blog posts on his website attest.

It saddens me that this type of racism still exists in America, yet there is no doubt that it still does.  Having grown up in Alabama during the 1970's and 80's, I know that there is still a hard-core of "unreconstructed rebels" out there who still harbor racism.  I am thankful that my parents taught my sister and I differently.  I can't help but think about who programmed this young man to hate to such a degree that he felt justified in taking nine precious lives, all because of the color of their skin.  And, of course this also stirs up old wounds from the Civil Rights Era.  I have heard several references on the Sunday shows to the tragic bombing of a black church in Birmingham in 1963 (where my parents were living at the time and which I wrote about in this article "September 15, 1963").  Yet, as I heard one commentator note, there is at least one profound difference in that tragedy almost fifty-two years ago and this.  The local and state governments then did everything they could to downplay that tragedy and not to bring to justice the perpetrators. Today, every level of law enforcement and of the government in South Carolina was and is intent in bringing this young man to justice.  To me, the conclusion that we should draw from this, at least from the race angle, is that we truly have come a long way since those dark days.  I don't for a minute believe that this young man's thinking reflects the way that most South Carolinians think.  The remaining members of the AME Emmanuel church have themselves testified to the outpouring of support among people of all races, and that is how it should be.  I told my wife that if I lived there, I would be hard pressed not to go to their Sunday service today as a measure of support.  Judging from the size of the crowd at that service, which included the governor of the state (who is not white but Native American), the response has been overwhelming in support.

One of the issues that continually comes up whenever we have one of these shootings in gun control.  Could this have been prevented by more gun control laws?  I hardly think so.  The issue to me clearly is not the type of weapon this young man used to commit this horrendous crime, but the hatred that was in his heart.  If he hadn't had access to a gun, he could have used a knife or another kind of weapon. I would grant you that he might not have easily taken as many lives that way, but he certainly could have done great damage.  You could just as easily make the point that had one of the church members had a gun that evening and been able to use it, many lives might have been spared. There is an element in our society that hates the fact that we have the 2nd Amendment guaranteeing our use of firearms and would like to change it.  I don't believe that will happen anytime soon.

However, the most encouraging thing that happened out of this tragedy happened at a hearing for Dylan Roof, the young man who committed these murders.  At the hearing Friday, (which you can watch here), representatives of the victims' families were given an opportunity to speak in front of the perpetrator.  I watched this short hearing, and I couldn't help but be moved by the words of the family members, whose loved ones' lives had been taken less than forty-eight hours before.  In this hearing, one by one the family members stood at the microphone and told the assailant how much that his action had hurt them, but then told him that they forgive him.  First up was Nadine Collier, daughter of victim Ethel Lance.  She said

I would just like him to know that, to say the same thing that was just said: I forgive him and my family forgives him. But we would like him to take this opportunity to repent. Repent. Confess. Give your life to the one who matters most: Christ. So that He can change him and change your ways, so no matter what happens to you, you’ll be okay.


Others spoke in the same vein. 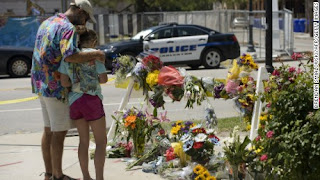 As I have heard it stated, this says volumes about the type of people in that church and what they Clementa C. Pinckney, who himself was one of the victims.  It also highlights a distinctive feature of Christianity that is not found in any other religious system...that is forgiveness.  How can a person have forgiveness in their heart for someone who had caused them such grief?  It is only through knowing Jesus and understanding his forgiveness of us that we can forgive others.
were taught by their beloved pastor,

Jesus taught forgiveness.  Following the Disciples or Lord's Prayer in Matthew 6:9-13, he made this remarkable statement:

Jesus taught us that God will forgive us only when we have a forgiving spirit toward others, even when they have done unspeakable evil towards us or our loved ones.  Does this mean that they are not held accountable for their actions. Certainly not!  This young man could and should serve the appropriate penalty as proscribed by the government.  However, we as Christians cannot harbor hatred in our hearts.  Why?  Because Jesus himself died for us when we ourselves were unworthy of forgiveness.  Paul says it well in Ephesians 4:21


Be kind to one another, tender-hearted, forgiving each other, just as God in Christ also has forgiven you.

Our ability to forgive is based on the fact that we ourselves have been forgiven.  Jesus died the most heinous of deaths on our behalf so that we can escape hell and live with him in heaven.  We have been forgiven much.  Because of this, we must forgive ourselves.

This brings to mind the story that Corrie ten Boom told in her book "The Hiding Place." Corrie and her sister Betsy were interned in the notorious women's prison Ravensbrook in Nazi Germany.  Though Corrie survived the horrible ordeal, Betsy did not.  She tells in her book about the day that she met one of her former prison guards after she had given a talk on forgiveness:

Betsie and I had been arrested for concealing Jews in our home during the Nazi occupation of Holland; this man had been a guard at Ravensbruck concentration camp where we were sent. ...


"You mentioned Ravensbruck in your talk," he was saying. "I was a guard in there." No, he did not remember me.

"But since that time," he went on, "I have become a Christian. I know that God has forgiven me for the cruel things I did there, but I would like to hear it from your lips as well. Fraulein, ..." his hand came out, ... "will you forgive me?"

And I stood there — I whose sins had every day to be forgiven — and could not. Betsie had died in that place — could he erase her slow terrible death simply for the asking? It could not have been many seconds that he stood there, hand held out, but to me it seemed hours as I wrestled with the most difficult thing I had ever had to do. For I had to do it — I knew that. The message that God forgives has a prior condition: that we forgive those who have injured us. "If you do not forgive men their trespasses," Jesus says, "neither will your Father in heaven forgive your trespasses." ...

And still I stood there with the coldness clutching my heart. But forgiveness is not an emotion — I knew that too. Forgiveness is an act of the will, and the will can function regardless of the temperature of the heart. "Jesus, help me!" I prayed silently. "I can lift my hand, I can do that much. You supply the feeling."

And so woodenly, mechanically, I thrust my hand into the one stretched out to me. And as I did, an incredible thing took place. The current started in my shoulder, raced down my arm, sprang into our joined hands. And then this healing warmth seemed to flood my whole being, bringing tears to my eyes.

For a long moment we grasped each other's hands, the former guard and the former prisoner. I had never known God's love so intensely as I did then.

What a beautiful story of forgiveness!  I would pray that each one of the members of these families would feel the love of God as intensely as Corrie ten Boom did that night in 1947.

Forgiveness is not easy.  It takes tremendous courage.  This also reminds me of a remarkable woman who I know how can testify about the power of forgiveness.  Her name is Ina Kae Simpson and she is a member of the church where I attend.  Ina's husband Charlie Simpson was murdered in 1997 by a young man who was on drugs.  Ina's decision to forgive this young man had a part in his salvation and eventually even in his release.  I was so impressed with her story that the Lord put it on my heart to write a short book about her experience.  (You can purchase this book "Grace In Shoe Leather" on Amazon.com for only 99 cents here.)

I'd like to close this post with the words of the sister of Depayne Middleton Doctor, who spoke at the hearing in Charleston on Friday:


That was my sister, and I’d like to thank you on behalf of my family for not allowing hate to win. For me, I’m a work in progress. And I acknowledge that I am very angry. But one thing that DePayne always enjoined in our family … is she taught me that we are the family that love built. We have no room for hating, so we have to forgive. I pray God on your soul.

Want To Read More?  Here are links to related articles on this site:

Stability For Our TimesWhy Pray?
The Greatest Single Ingredient Of A Successful Prayer Life
Church Etiquette-Wisdom From A Bygone Age
God Can Do Things In Prayer That Are Just So Cool!
September 15, 1963
Posted by Wayne Nall Jr at 10:47 PM No comments: