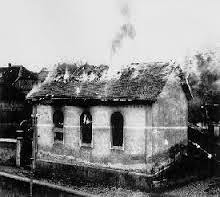 Seventy-five years ago, in the fall of 1938, storm clouds were brewing around the world.  Germany carried out it's Kristallnacht. terrorizing its Jewish citizens and expelling many thousands of them to Poland and elsewhere.  Hitler and his minions were carving up Czechoslovakia after the Munich Agreement, while Neville Chamberlain of Britain was coming home from Munich proclaiming "Peace For Our Times." Japan was also becoming increasingly aggressive towards her Asian neighbors, invaded Canton, China on October 21.   However, the American public was largely inattentive.  More pressing concerns for America were the still-high unemployment rate as the Great Depression lingered on and a huge hurricane which killed hundreds in New England, reeking havoc on our East Coast.  The Yankees had just beat the Cubs (!) in the World Series, capturing their third title in a row.  And a nation wide panic ensued after Orson Wells presented his radio broadcast "War Of The Worlds."  The national sentiment was to let Europe's problems stay in Europe...Asia's problems in Asia.  As we know, it didn't exactly work out that way.

Fast forward to today.  Let's count down the top news stories in America for 2013 (according to Yahoo! News)

(I have to give it to the folks at Yahoo! News for really getting to the heart of what's really important to the American people!)

Incidently, I saw last week that the #1 vote getter so far for Time's Person of the Year for 2013 at that time was...Miley Cyrus.  Good grief!

While we sleep today, storm clouds are again brewing.  America's role in the world as Leader of the Free World is rapidly collapsing before our very eyes.  Victor Davis Hansen wrote an incredibly insightful article yesterday in National Review entitled, "The World's New Outlaws."  This renowned historian gives us a glimpse into the future as he sees it, based on the collapse of American leadership in the world.  It is worth your while to read this important article.  He identifies three new outlaw regimes, which are each a not-so-distant threat to America and her allies.  Hansen writes of them:


The world as we once knew it is insidiously vanishing amid Utopian blather about a new Russia, a new Iran, and a new China. In its place is emerging something like the wild world of 1803–1815 or 1936–1945. If the U.S. is either spiritually or fiscally incapable of exercising its old leadership, others will step into the vacuum.


I would only add that it could actually be much worse than the Napoleonic world of 1803-1815 or the Nazi/Japanese dominated world of 1936-1945, as neither of these "wild worlds" (as he call them) included nuclear weapons.

Do I think World War III is around the corner?  I doubt that it is as close to us as World War II was to 1938 (although it could be).  However, with America on the decline thanks to it's current inept leadership, and Iran, Russia, and China on the ascendancy, we could be facing existential threats much sooner than most of us realize.

I honestly don't like writing about this stuff.  I'd much rather write something encouraging and uplifting that would warm everyone's hearts and make them feel good.  However, I feel compelled to speak up about these things now.  I may be spitting into the wind, but we need to realize what's going on around us. Yet I also take great comfort in knowing that ultimately God is in control and He will guide us through whatever is coming.


Want to read more?  Here's links to some of my more popular posts:
A Colossal Failure
Abolition and Abortion
Things My Mom Taught Me
September 15, 1963
Reflections On 30 Years of Marriage-Part 1
My Take On "The Bible" Series