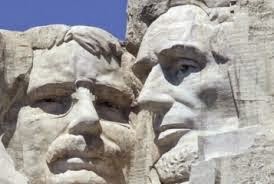 I recently came across a short essay that Theodore Roosevelt wrote about Abraham Lincoln while Roosevelt was still president.  He wrote these words when "politician" and "statesman" were synonymous and when neither word carried an onerous connotation.  Both of these men, TR and Lincoln were statesmen in the best sense of the word.  How we desperately need men and women who possess both great character and great wisdom to lead us now, as these men did so well in the last two centuries!  As we enter the heart of this election season, I would to God that the men and women running for office would heed these words, written over 100 years ago, but which still ring true today.  WN

(Italics below are mine)

Immediately after Lincoln's re-election to the Presidency, in an off-hand speech, delivered in response to a serenade by some of his admirers on the evening of November 10, 1864, he spoke as follows:

"It has long been a grave question whether any government not too strong for the liberties of its people can be strong enough to maintain its existence in great emergencies. On this point, the present rebellion brought our republic to a severe test, and the Presidential election, occurring in regular course during the rebellion, added not a little to the strain.... The strife of the election is but human nature practically applied to the facts in the case. What has occurred in this case must ever occur in similar cases. Human nature will not change. In any future great national trial, compared with the men of this, we shall have as weak and as strong, as silly and as wise, as bad and as good. Let us therefore study the incidents in this as philosophy to learn wisdom from and none of them as wrongs to be avenged.... Now that the election is over, may not all having a common interest reunite in a common fort to save our common country? For my own part, I have striven and shall strive to avoid placing any obstacle in the way. So long as I have been here, I have not willingly planted a thorn in any man's bosom. While I am deeply sensible to the high compliment of a re-election and duly grateful, as I trust, to Almighty God for having directed my countrymen to a right conclusion, as I think for their own good, it adds nothing to my satisfaction that any other man may be disappointed or pained by the result."

This speech has not attracted much general attention, yet it is in a peculiar degree both illustrative and typical of the great statesman who made it, alike in its strong common-sense and in its lofty standard of morality. Lincoln's life, Lincoln's deeds and words, are not only of consuming interest to the historian, but should be intimately known to every man engaged in the hard practical work of American political life. It is difficult to overstate how much it means to a nation to have as the two foremost figures in its history men like Washington and Lincoln. It is good for every man in any way concerned in public life to feel that the highest ambition any American can possibly have will be gratified just in proportion as he raises himself toward the standards set by these two men. It is a very poor thing, whether for nations or individuals, to advance the history of great deeds done in the past as an excuse for doing poorly in the present; but it is an excellent thing to study the history of the great deeds of the past, and of the great men who did them, with an earnest desire to profit thereby so as to render better service in the present. In their essentials, the men of the present day are much like the men of the past, and the live issues of the present can be faced to better advantage by men who have in good faith studied how the leaders of the nation faced the dead issues of the past. Such a study of Lincoln's life will enable us to avoid the twin gulfs of immorality and inefficiency--the gulfs which always lie one on each side of the careers alike of man and of nation. It helps nothing to have avoided one if shipwreck is encountered in the other. The fanatic, the well-meaning moralist of unbalanced mind, the parlor critic who condemns others but has no power himself to do good and but little power to do ill--all these were as alien to Lincoln as the vicious and unpatriotic themselves.His life teaches our people that they must act with wisdom, because otherwise adherence to right will be mere sound and fury without substance; and that they must also act high-mindedly, or else what seems to be wisdom will in the end turn out to be the most destructive kind of folly. Throughout his entire life, and especially after he rose to leadership in his party, Lincoln was stirred to his depths by the sense of fealty to a lofty ideal; but throughout his entire life, he also accepted human nature as it is, and worked with keen, practical good sense to achieve results with the instruments at hand. It is impossible to conceive of a man farther removed from baseness, farther removed from corruption, from mere self-seeking; but it is also impossible to conceive of a man of more sane and healthy mind--a man less under the influence of that fantastic and diseased morality (so fantastic and diseased as to be in reality profoundly immoral) which makes a man in this work-a-day world refuse to do what is possible because he cannot accomplish the impossible.

In the fifth volume of Lecky's History of England, the historian draws an interesting distinction between the qualities needed for a successful political career in modern society and those which lead to eminence in the spheres of pure intellect or pure moral effort. He says:

"....the moral qualities that are required in the higher spheres of statesmanship [are not] those of a hero or a saint. Passionate earnestness and self-devotion, complete concentration of every faculty on an unselfish aim, uncalculating daring, a delicacy of conscience and a loftiness of aim far exceeding those of the average of men, are here likely to prove rather a hindrance than an assistance. The politician deals very largely with the superficial and the commonplace; his art is in a great measure that of skillful compromise, and in the conditions of modern life, the statesman is likely to succeed best who possesses secondary qualities to an unusual degree, who is in the closest intellectual and moral sympathy with the average of the intelligent men of his time, and who pursues common ideals with more than common ability.... Tact, business talent, knowledge of men, resolution, promptitude and sagacity in dealing with immediate emergencies, a character which lends itself easily to conciliation, diminishes friction and inspires confidence, are especially needed, and they are more likely to be found among shrewd and enlightened men of the world than among men of great original genius or of an heroic type of character."

The American people should feel profoundly grateful that the greatest American statesman since Washington, the statesman who in this absolutely democratic republic succeeded best, was the very man who actually combined the two sets of qualities which the historian thus puts in antithesis. Abraham Lincoln, the rail-splitter, the Western country lawyer, was one of the shrewdest and most enlightened men of the world, and he had all the practical qualities which enable such a man to guide his countrymen; and yet he was also a genius of the heroic type, a leader who rose level to the greatest crisis through which this nation or any other nation had to pass in the nineteenth century.

\Want to read more?  Here's links to some of my more popular posts:
Lincoln and Obama-Two Views Of Welfare
Reflections On 30 Years of Marriage-Part 1
What Is Marriage?
Five Biblical Reasons To Support Traditional Marriage