“... the sufferings and the glory belong together indissolubly. They did in the experience of Christ; they do in the experience of his people also (17). It is only after we ‘have suffered a little while’ that we will enter God’s ‘eternal glory in Christ’, to which he has called us. So the sufferings and the glory are married; they cannot be divorced. They are welded; they cannot be broken apart.” John Stott


There is no comparison between the sufferings that we endure and the glory which follows.


Moreover, the ‘sufferings’ include not only the opposition of the world, but all our human frailty as well, both physical and moral, which is due to our provisional, half-saved condition. The ‘glory’, however, is the unutterable splendour of God, eternal, immortal and incorruptible. One day it will be revealed (18). This end-time disclosure will be made ‘to us’ (RSV), because we will see it, and in us (NIV), because we will share in it and be changed by it. It is also ‘in store for us’ (REB), although the precise nature of ‘what we will be has not yet been made known’.


‘Suffering’ and ‘glory’ are inseparable, since suffering is the way to glory (see verse 17), but they are not comparable. They need to be no contrasted, not compared. In (2 Corinithians) Paul has evaluated them in terms of their ‘weight’. Our present troubles, he declared, are ‘light and momentary’, but the glory to come is ‘eternal’ and ‘far outweighs them all’. The magnificence of God’s revealed glory will greatly surpass the unpleasantness of our sufferings.


The word for ‘eager expectation’ (NASB “anxious longing”) means ‘to wait with the head raised, and the eye fixed on that point of the horizon from which the expected object is to come’. It depicts somebody standing ‘on tiptoe’ (JBP) or ‘stretching the neck, craning forward’ in order to be able to see. And what the creation is looking for is the revelation of God’s children, that is, the disclosure of their identity on the one hand and their investiture (ordained) with glory on the other. This will be the signal for the renewal of the whole creation.


…(Paul) sums up the result of God’s curse by the one word translated, frustration (“futility” NASB). It means ‘emptiness, futility, purposelessness, transitoriness’ (BAGD). The basic idea is emptiness, whether of purpose or of result. I. It is the word chosen by the LXX translators for ‘Vanity of vanities!… All is vanity’,100 which NIV finely renders ‘Meaningless! Meaningless!… Utterly meaningless!’ As C. J. Vaughan comments, ‘the whole Book of Ecclesiastes is a commentary upon this verse’. For it expresses the existential absurdity of a life lived ‘under the sun’, imprisoned in time and space, with no ultimate reference point to either God or eternity.


Negatively, creation will be liberated from its bondage to decay (21b). (The word translated decay NASB corruption) seems to denote not only that the universe is running down (as we would say), but that nature is also enslaved, locked into an unending cycle, so that conception, birth and growth are relentlessly followed by decline, decay, death and decomposition….So futility, bondage, decay and pain are the words the apostle uses to indicate that creation is out of joint because it is under judgment. It still works, for the mechanisms of nature are fine-tuned and delicately balanced. And much of it is breathtakingly beautiful, revealing the Creator’s hand. But it is also in bondage to disintegration and frustration. In the end, however, it will be ‘freed from the shackles of mortality’ (REB), ‘rescued from the tyranny of change and decay’ (JBP).

Now he adds that meanwhile, in the present, even while it is eagerly awaiting the final revelation (19), the creation is groaning in pain. Its groans are not meaningless, however, or symptoms of despair. On the contrary, they are like the pains of childbirth, for they provide assurance of the coming emergence of a new order. ...Jesus himself used the same expression in his own apocalyptic discourse. He spoke of false teachers, wars, famines and earthquakes as ‘the beginning of birth-pains’ (NIV) or ‘the first birth-pangs of the new age’ (REB), that is, preliminary signs of his coming.


The universe is not going to be destroyed, but rather liberated, transformed and suffused with the glory of God.


Vs. 23
First fruits of the Spirit = down payment. Eph. 1:14 tells us the Spirit was given to us as a “pledge of our inheritance.”


2nd “groaning of Romans 8. We long for our eternal inheritance.


Vs. 4 of “How Sweet the Name of Jesus Sounds” (John Newton)


Weak is the effort of our heart,


And cold our warmest thought;


But when we see Thee as Thou art,


We’ll praise Thee as we ought,


Hope is the “eager expectation” of the child of God who awaits the full salvation that we have not yet received.


“...we wait for it patiently, that is, for the fulfilment of our hope. For we are confident in God’s promises that the firstfruits will be followed by the harvest, bondage by freedom, decay by incorruption, and labour pains by the birth of the new world. This whole section is a notable example of what it means to be living ‘in between times’, between present difficulty and future destiny, between the already and the not yet, between sufferings and glory. ‘We were saved in hope’ brings them together. And in this tension the correct Christian posture is that of waiting, waiting ‘eagerly’ (23, cf. 19) with keen expectation, and waiting ‘patiently’ (25), steadfast in the endurance of our trials (hypomonē). We are to wait neither so eagerly that we lose our patience, nor so patiently that we lose our expectation, but eagerly and patiently together.

In my opinion whatever we may have to go through now is less than nothing compared with the magnificent future God has planned for us. The whole creation is on tiptoe to see the wonderful sight of the sons of God coming into their own. The world of creation cannot as yet see reality, not because it chooses to be blind, but because in God’s purpose it has been so limited—yet it has been given hope. And the hope is that in the end the whole of created life will be rescued from the tyranny of change and decay, and have its share in that magnificent liberty which can only belong to the children of God!


It is plain to anyone with eyes to see that at the present time all created life groans in a sort of universal travail. And it is plain, too, that we who have a foretaste of the Spirit are in a state of painful tension, while we wait for that redemption of our bodies which will mean that at last we have realised our full sonship in him. We were saved by this hope, but in our moments of impatience let us remember that hope always means waiting for something that we haven’t yet got. But if we hope for something we cannot see, then we must settle down to wait for it in patience. -
Posted by Wayne Nall Jr at 10:54 AM No comments: 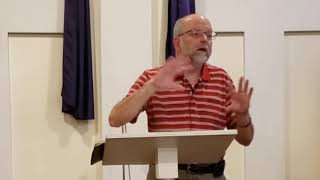 Following are my lesson notes for Lesson #17. Unfortunately, the video of this lesson is not available.

Vs. 12 - “under obligation” lit. means “debtors” (KJV, NKJV). We are not debtors to the flesh...Unstated implication is that we ARE debtors to the spirit!

Vs. 15
placement.” “It is a legal term that in this context indicates that believers have been given the full privileges of sonship into God’s family. Concurrent with this placement into sonship, God places the Spirit of His Son into our hearts so that we become, in effect, His natural-born children.”
character more worthily.’
Vs. 16
Spirit indwelling them to be their energy, their guide, their Lord. It is for this very reason that many young Christians are slow in spiritual progress and never seem to grow...Regardless the dullness of Christians in recognizing the dwelling of the Person of God's Spirit in them, God nonetheless has given Him to them. This is an immutable fact which no condition of the Christian can gainsay (contradict). Because they have been regenerated they automatically have become a holy temple fit for habitation of the Holy Spirit. If only these would claim by faith this part of God's promise as they did the other part, they would gloriously experience both.”

Posted by Wayne Nall Jr at 2:35 PM No comments:

Taking your own spiritual temperature (Examine Yourself 2 Cor. 13:5)

Summary - Am I a net deposit or a net withdrawal to the body of Christ? Is the body built up by my being a part or is it being hindered because of my lack of participation?
Posted by Wayne Nall Jr at 7:32 AM No comments: