For me, the Sunday morning meeting started at the Baymont Hotel where we were staying. I had gone to the small breakfast nook to eat something, and struck up a conversation from a older gentleman from Wisconsin named Jim. As we chatted, I mentioned that I was a pastor and we were attending meeting nearby. I was wearing a suit this time, and he made some remark about that he figured as much, since only pastors would wear a suit on Sunday anymore. But this led to talking about spiritual matters. He was raised Catholic, but didn’t practice any religion seriously until 2000, when his daughter came home from college. She told her that she had given her life to Jesus, gave her dad a Bible and said, “Here, read this!” And he’s been reading it ever since. We talked...actually I mostly listened... for about an hour. I began to realize that Jim was seeing that the church of today didn’t match what was in his Bible at all. He made some remark to the effect that he hadn’t been able to find anybody that was “doing church” according to the Bible. I told him, “Brother, I can tell you that, like God told Elijah, there are seven thousand who haven’t bowed the knee to Baal, and I’m meeting with some of them this morning!” His response was, “Yes, the Remnant.” Before we left, I gave him a copy of the Voice in the Wilderness and invited him to the meeting. He said he would come after he did his laundry. Somehow I thought he really would come.

We were privilege again to be in led in worship at the beginning of the Sunday morning meeting by Pastor Taylor and Molly Keller. During that time, my wife Kathy, prompted by the Holy Spirit, asked if she could teach us a song in sign language. So Pastor Taylor played “I Love You, Lord” as she taught us another way to praise God. The body was edified by this.

Marcia Schultze shared this account with me of the first part of the Sunday service:

Jewell (Helm Dyer) started out the Sunday morning with her piano playing. It always amazes me what all she can add to a hymn. I love to hear her play! It followed with a few testimonies from John McAdams, Debbie Batton, and Joyce Miller. Aaron made a statement in the midst of this that said, “It’s OK to laugh in church, but not to laugh at the church." Then (Roland) Abraham had another prayer in praising and praying to the Lord. It is something to hear him pray! Mrs. Nall (also) taught us a song in sign language.

Towards the end of the worship time, I looked around and there was Jim, sitting about halfway back in the sanctuary! I went back and asked him if he would like to come sit up front with us, and he gladly came. Because our pew was full, I seated him on the front pew next to us between Don Dicus (who he had also had fellowship with in the hotel) and Pastor Jerry Keller.

God had led for Pastor Jerry to share communion with us and to deliver the morning message. When Pastor Aaron asked him to come up to officiate communion, he asked if we could do the communion and the message together, which was fine with Pastor Aaron. One of his first remarks was about a young fifteen-year-old girl who came to their church for the first time and just came up and sat on the front row. (I thought this was very interesting. I shared with Pastor Jerry later that the man who just sat down beside him was here for the first time and sat down on the front row!) During the service at Plainfield, Pastor Jerry shared about Rev. Loran Helm and the impact of “A Voice In The Wilderness” and that they were distributing the book to any who wanted it. The young girl, who can gone “church shopping” with her parents’ consent, came home and noticed a blue book on the counter. The girl asked her mother, “Where did this come from?” Her mother shared with her that she had bought a copy of the “A Voice in the Wilderness” at a local library sale, and that this was her favorite book next to the Bible. The girl was able to share with her mother that a church that she attended this morning was led by people who had sat under Rev. Helm’s teaching! Her mother undoubtedly had the only copy of “A Voice” in Plainfield outside of Plainfield Christ Fellowship, which had just opened it’s doors. This girl is now in Africa training to be a missionary.

What followed is probably one of the most unusual communion services any of us had ever attended.

Marcia Schultze shared this discription of the service: 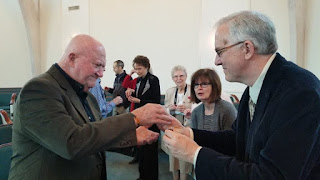 Jerry Keller had the message for the morning, but he intertwined it in with the communion we were taking. He had us all stand up and go into the aisle, facing one another, with our backs to the pews. He first passed the cup, and told us to exchange it with our neighbor, and then to drink our neighbors cup (thanking God for the blood that was shed for our neighbor). Then they passed the bread, and we were to take that, and then pray for a need our neighbor had. This was all done in the midst of singing and prayer. It was so impressive and meaningful.

When I asked others to share their thoughts about the meetings, I found out that this special communion was one of the highlights of the meeting for many people. Here are some of the remarks that were shared with me about this time:

When we shared the communion with each other by giving our wine to another person, it touched me so much. Instead of me giving it to myself, by giving it to others, it made me feel as I am sharing Jesus blood with others. (Barbara Stefan)

Sharing comminion was so sweet very real connection..Holy Spirit was very much all around us through ENTIRE meeting!! WE ARE SO BLESSED DEAR fellowship !! (Rev. Helm’s daughter Joyce Miller)

I believe the communion time was a blessing to all who participated. Sharing communion with John McAdams is a memory I will cherish for the rest of my life. John and Janet were a blessing when they came to Indianapolis. I purchased their home when they moved back to Parker. John also is from my mother's home town, Wellsburg, West Virginia. (Daniel Jones)

My new friend Jim was quite taken by what he experienced in the meetings. He told me later 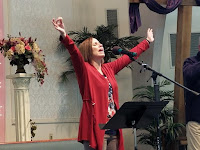 that when he came in, he really didn’t sense anything unusual for awhile, but the more he listened and observed, the more he realized that God Himself was really leading this meeting. Towards the end of the morning service (which extended well into the afternoon), he got the mike and asked Pastor Aaron rather pointedly, “Is this the way it is every Sunday?” He was so stirred by what he saw that he called his wife after the service to let her know. Jim would stay for the entire service, and shared lunch with us for some time afterwards. He and His wife are planning to retire somewhere further south, and he told me they are going to be looking at and praying about “somewhere in Indiana” now! Praise the Lord! God knows how to make connections...all we have to do is follow.

In Pastor Jerry’s message, he shared that the Lord had woke him up early in the morning recently and spoke the phrase into his heart, “co-opted words.” He looked it up and found this definition of co-opted: “Words that have strayed from the original meaning. Words that have been twisted and turned by someone for their own purposes so that they no longer mean what they meant when the original author first spoke them.” Pastor Jerry shared that “trust” is one of these “co-opted” words. He gave us what he called “the apostolic sign language” for trust by putting his hand right in front of his face. He said, “That’s trust!” (This was something that came from Rev. Helm.) He went on to share an excellent message from John 21 about Jesus’ words to Peter...”You follow me!” We’re not to worry about the person beside us and the way that the Lord may or may not work with them. We each are called individual to take up our cross and follow Him.