When we heard a few weeks after Waiting 2017 in December that God was leading for another “Waiting” meeting in March, some of us were slightly surprised. I say “slightly” because when you are walking with God and trusting the Holy Spirit, you are seldom very surprised at the unusual ways that the Spirit of Christ sometimes works. His Spirit seldom works along conventional lines. So we made plans, and when the time came we joyfully headed to Parker City, Indiana to be with others called of God at Waiting 2018, which was held March 10 and 11th.
Some might ask, “What is a ‘Waiting on God’?”

Our friend from Kokomo Christ Fellowship in Kokomo, Indiana, Jody Hollis, describes it this way:

(A Waiting is) always such a time of being with the children of God, feeling the love of God though Jesus Christ, in such a blessed way. When the church comes together there should always be this great love flowing outward toward all. In a Waiting you have not laid out plans of any kind. You move as the Spirit leads, and what a mighty leading of God that went forth in this Waiting.

I described the last series of meetings “Waiting 2017” in one of my blog posts (which you can read here) about those meetings this way:

All of this could be said of our gathering in early March 2018 as well.

For me, the meeting began before the “official” opening. Not long after we came in the building, I saw my dear friend and the pastor of Parker City Christ Fellowship, Aaron Simms, at the door of his office. He invited me in and we chatted briefly. I knew at that point that I was to pray for him and for the meetings, which he gladly agreed to. When we were done, he said, “I knew someone was to come and pray with me, but I didn’t know who the Lord was going to send.” I was grateful for the leading of the Holy Spirit before the meeting ever began.

The Saturday morning session began when Bro. Roland Abraham, a godly man and superintendant of a local school district (what a wonderful combination!), prayed a rousing prayer of repentence and faith, calling out again and again, “Jesus, Son of David, have mercy on us!” in the same manner as the blind men sitting at the Jericho wayside (Matthew 20:30). (See Video #1 below) One of the most remarked-on events of the entire gathering took place right after this. Dennis Begeman, from our congregation of Fair Haven Christ Fellowship in Cynthiana, Indiana, blew the ancient Shofar to begin our time of waiting and worship, in such clear, melodious tones that you would think we were at the gates of Jerusalem (See Video #2 below).

Sis. Marcia Schultze from Kokomo described these first moments of the Saturday meeting this way:


The morning session began with Pastor Simms calling on Roland Abraham to pray. He prayed over and over again, each time becoming louder: “Jesus, son of David, have mercy on us.” It certainly set the mood for the rest of the meetings. Then he called on (Dennis Begeman) to come and play the shofar. He played it with the clearest tones I’ve ever heard. He explained to us the different tones that they play on the shofar and what they mean - including "sound the alarm" and "the king is coming".

As in the previous gathering in December, we were blessed with anointed worship throughout these meetings led by Pastor Taylor Keller and his sister Molly, both from Plainfield (IN) Christ Fellowship. In this meeting, beginning with a call to “Awaken” on Saturday morning, we were again capably led in worshipful praise by these two talented and Spirit-touched young people, with others such as Missy Simms and Elizabeth Doss adding to our worship at various times.

Pastor Aaron was stirred to exhort briefly (Video #3 below), sharing with us “The one word on my heart is ‘repent!’...The kingdom of heaven is at hand, and you don’t know when you will hear this call again.” Then followed a time of repentance before the living God, as many went to the altar, some to the physical altar and even more to the spiritual altar of the heart.

Aaron Sims preached quite a sermon on: “Time to repent!” Some statements he made were: “The return of Christ will never come when you think it will.” “Pastors don’t quit:” “You're not lacking anything to follow Jesus.” 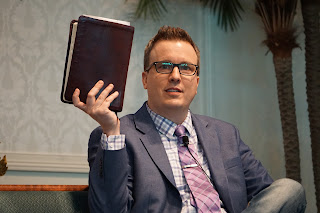 versions of the Bible) need to go by the wayside!” (Amen to that!) “We need each other...the whole world sometimes does a better job coming together in the flesh than we do in the Spirit!” We heard in this Spirit-led message, a needed exhortation for unity and surrender. (It would be really worth your time to watch this message below.)


After the morning meeting, we enjoyed a time of food and fellowship in the Spirit, thanks to the sacrificial work of the members of Parker City Christ Fellowship, especially Janice Gilbert and Beth LaVeau.