I Went To A Town Hall Meeting…And God Showed Up! 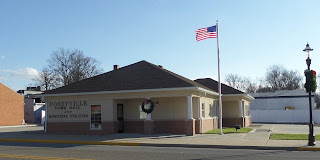 God gave me an assignment this past weekend.  I honestly didn’t see it as God-inspired task when I decided to go to a Saturday morning town hall meeting in our neighboring town, where four Indiana Representatives and one State Senator would be taking questions.  I’d never been to one before but just decided to go to this one and check it out.

There was a pretty decent crowd there for our small town and I took my seat in the back when the two-hour meeting opened.  Each one of the participants had an opening statement about his or her work at the statehouse.  I knew three of the five and really have a lot of respect for all of them.  Throughout the meeting, I got the sense that all of them, including the one from the opposite party of mine, were really good people who were trying to do the best job they could for our state.  The meeting was very civil…quite the opposite of the raucous affairs that you see on the TV cameras from time to time.  It was also very informative.  I haven’t taken any interest in state politics until the last handful of years, but I’ve learned that much more gets done at the state level than most people realize.  Our Founders actually intended for the lion’s share of the governmental work to be done at the state level not the national…but I digress.

Not too long after the meeting started I began to feel a little nudge from the Holy Spirit about a question that He wanted me to ask.   Now I didn’t come with any idea of asking any questions, but I had felt a nudge before I left home to grab a paper notebook to go with me.  I began (albeit reluctantly) to scribble some thoughts on paper while the meeting was going on.  I really didn’t want to do this, and I wasn’t a hundred percent sure that this was even the Lord speaking to me.  However, as time I went on I began to feel more and more but that this was God because…I really didn’t want to do it!

If we want to walk with God, we must listen for the nudges and be willing to obey them when we get them.  One way that I can often tell that it is really God speaking to me in a particular situation is that  He wants me to do something  that I don’t want to do at all.  If it is something that I really wanted to do anyway, well…that’s much harder.  That could just be me speaking to me. Following the Spirit takes much practice, and I confess I’m still a novice at it!

So at some point in the meeting I began holding my hand up when they began taking questions.   There were a number of people ahead of me, and I didn’t really know if they would have enough time to get to me.  Really, that was just fine with me, because…I really didn’t want to do it! (Did I say that already?)

The meeting was to end at eleven.  At five minutes til, the gentleman directing the meeting tapped me
on the shoulder and said, “You’re the last question.”  I had been asking the Lord to give me courage to speak boldly, as honestly, I’m not bold at all in my own self.  It was going to have to be all Him!

After introducing myself as a local pastor, I told them that I belong to a praying church. I also commended them for their civility and their hard work as legislators.  I told them that they are true citizen legislators, and I really meant that.   I then asked two questions:
When I sat down, to my amazement, the room erupted in applause.

Each legislator then responded to my questions. Interestingly, I didn’t get a lot of answers to the first question, although there were a few.  However, the reactions that I got from the second question were truly surprising to me.
Who knew?

Every one of them thanked me sincerely for the question.  There was almost a sense of amazement that anyone would ask this question. One of the panelists said, “We don’t get asked about us.”  In talking to the legislators after the meeting, I was again thanked for the question and was told, “We never hear this!  People always come to us just because they need something.”

I had several audience members tell me things like “That was the best question of the day” and “That was supposed to be the last question.” I know it was.  There was no way I could have engineered it.

In reflecting about the amazing things that God did with this very simple question, I realized a few things:

Days before the town hall meeting, God had begun to put in my heart a message to share with our congregation Sunday.  Part of it had to do with Elijah’s “bad hair day” in 1 Kings 19.  This great man of God had the worst day of his life recorded for us in that chapter.  He was thoroughly discouraged and afraid of an ungodly woman named Jezebel, even after he had been used of God in an amazing way on Mt. Carmel just a few days before.  He hid himself in a cave near Mt. Sinai, where God met him.  God’s words to Elijah that day are the same words that I believe He is speaking to the church today.  “What are you doing here, Elijah?”  In other words, "What are you doing in a place of discouragement and fear, when I have anointed work for you to do?"  Thankfully, Elijah would move out of the place of despondency and powerlessness to do even greater things for the kingdom of God.

As it turned out, the town hall meeting that I attended Saturday provided a perfect illustration for what God put on my heart to share with our congregation on Sunday.   God has called us to get out of our caves! God has called each of us to be “salt and light” in our families, our communities, and our world.  He expects us to be equipped, by spending time daily in His word and in prayer, and to be an active part in our local church body.  Then He expects us through the direction of the Holy Spirit to go love people.

A pastor friend of mine shared with me yesterday that Jesus had spoken the simple yet profound words to him recently, “Love is your weapon!”  That is essentially the weapon that God was prompting me to use at the town hall meeting.  It is a weapon that I have often failed to use, and a weapon that the church as a whole has seldom used.  Why don't we as a church put down our carnal weapons, and pick up the God-ordained, love-tinged "sword of the Spirit" that we are called to wield and use it daily for His glory?

2/7/18 Update
I received a text yesterday from the representative who asked for prayer for his personal health, as he has been fighting colds for weeks.  I wanted to share this here:

"...later on Saturday, after the Town Meeting, and completely  unexpected, a doctor acquaintance stopped by our house...(My wife was helping his wife with sewing).  He asked me how I was...before he left I had a prescription for antibiotics.  How often do you get an unprompted house call from a doctor who is not even your doctor?  The Lord does answer prayer."


3/17 Update
I just uploaded the rest of the story today...What happened after the Town Hall that led to a prayer at the Indiana Statehouse..."The Question That Led To The Prayer"


Want to read more?  Here are a few other similar blog posts you might be interested in...

The Greatest Single Ingredient of a Successful Prayer Life
The Power Of An Endless Life
Fenelon's Spiritual Letters
These 300 Year Old Resolutions Are Still True Today!
Posted by Wayne Nall Jr at 12:10 PM