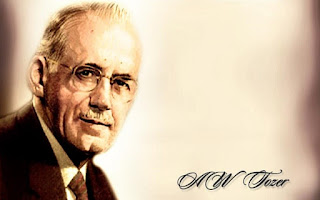 I have been sharing from A.W. Tozer's book, "The Dangers of a Shallow Faith: Awakening from Spiritual Lethargy." To read Part 1, click here...

The history of the race shows that trouble will come to all of us sometime. When sharp trouble, with its shocking, weakening sting, comes, some Christians meet it unprepared and, of course, they collapse. Is it the trouble that brings the collapse? Yes and no. The trouble brings the collapse in that they would not have collapsed without the trouble. But it is not the trouble that causes them to collapse, because if they had anticipated it and prepared for it, they would not have collapsed. As Proverbs 24:10 says, the man who goes down under trouble has little strength. His strength is small because his prayers are few and lean, but the man whose prayers are many and strong will not collapse when the trouble comes.

Temptation often comes unexpected and subtle. It is unexpected and too subtle for the flesh, but anticipatory prayer gets the soul ready for whatever temptation there may be. Was it the day that David walked on the rooftop that he fell into his disgraceful and tragic temptation with Bathsheba? No, it was the long gap of unrecorded time that the historians say was in between, and they do not know what David was doing. I know what David was not doing: he was not waiting on his God. He was not out looking at the stars and saying, “The heavens declare the glory of God” (Ps. 19:1). Yes, he had done that, but now he was not doing it. David went down because the whole weight of his wasted weeks previous this temptation bore down upon him. Temptation cannot hurt you if you have anticipated it by prayer; but temptation will certainly trip you if you have not.

When Attacked by Satan

Satan’s attacks are rarely anticipated because Satan is too shrewd to be uniform. If Satan established a pattern of attack, we would soon catch on to it. If the devil were to act in a uniform way and his attacks came on a regular schedule, the human race would have found him out a long time ago. The poorest church member would have learned how to avoid him. Because he acts in a highly irregular way and mixes things up, his attacks are deadly if we have not the shield of faith to protect ourselves.

A baseball pitcher does not start throwing when the first inning begins and throw the same ball in the same place for nine innings. If he did, the score would be 128 to 0. What does he do? He mixes them up. The batter never knows what type of ball is going to appear. First up, then down, then in, then out, then low, then fast, then down the middle; he mixes them up. It is the absence of uniformity that makes the pitcher effective.

Do you think the devil is not as smart as some of these major league baseball pitchers? Do you think the devil does not know that the way to win over a Christian is to fool him by irregularity? His modus operandi is to never attack twice the same way on the same day and to keep coming in from one side, one time, another side another time.

Do you think that boxer goes in there and gets himself rigidly stereotyped? He leads with his left, he strikes with his right, he moves back two steps, he moves forward two steps. Why, the commonest stumblebum would win over a fighter like that. A fighter has to use his head. He attacks from one side, then from the other, then dashes in, then backs away, then pedals backward, then charges, then his left and right, then feint, then five steps, then duck, then weave, then bob, you know how fighters do it.

The devil will come after you today like a wild bull of Bashan, and tomorrow he will be as soft as a lamb; and the next day he will not bother you at all. Then he will fight you three days in a row, and then let you alone for three weeks. Remember what was said of Jesus after the three temptations? He left Him for a season. Why? To get the Lord to drop His guard, of course.

The devil fights like a boxer, pitches like a skilled pitcher and uses all kinds of strategy. That is why I say that it is hard to anticipate him; you do not know what he is going to do next. You can always put a blanket anticipation down by realizing that the devil is always after you; and so by prayer and watching and waiting on God, you can be ready for his coming when he does come. You can win—not the day he arrives, but the day before he arrives. Not the noon he gets to you, but the morning before the noon.

Never Let the Day Creep Up on You

The only way to win consistently is to keep the blood of the Lamb on the doorposts of your heart; to keep the cloud and fire over you in the way Jehovah God led the Israelites night and day through the desert; to keep your fighting clothes on and never allow the day to creep up on you.

Never get up late in the morning and look at your clock and say, “I’m late and can’t take time now,” and dash away. If you must dash away, take a New Testament along. Instead of reading a magazine or newspaper on your break or at lunch, read your New Testament, and then bow your head and talk to God. Rather than not pray at all, grab prayer somewhere. As Bishop Ralph Cushman (1879–1960) wrote in “I Met God in the Morning”:

I met God in the morning
when the day was at its best,
And His Presence came like sunrise,
Like a glory in my breast.

All day long the Presence lingered,
All day long He stayed with me,
And we sailed in perfect calmness
O’er a very troubled sea.

Then I thought of other mornings,
With a keen remorse of mind,
When I too had loosed the moorings,
With the presence left behind.

So, I think I know the secret,
Learned from many a troubled way:
You must seek Him in the morning
If you want Him through the day!

I have four recommendations to help you value the necessity and power of prayer and to stay on top of what each day brings.

Never Act as if Things Were All Right

If the devil lets you alone for a while, and you are not in much trouble and you are reasonably happy and reasonably spiritual, you are likely to develop a complex that says, “Things are all right,” and you will neglect your prayer life. Remember: As long as sin and the devil, disease and death are abroad in the land like a fire, like a contagious disease, things are not all right. You are not living in a healthy or wholesome world, a helpful world, a world that is geared to keep you spiritually healthy. This vile world is not a friend of grace to lead us on to God: it is the opposite. Instead of assuming that things are all right, assume that they are always wrong, and then prayerfully prepare for them and anticipate them in whatever direction they come.

Do not trust the devil and say, “Things are all right, and I don’t need to pray now. This devil business is overdone, and I will not pray today. I will wait until Wednesday.” You cannot trust the devil, because it is from the devil that all of the world’s tyrannical and genocidal governments past and present learn their technique and get their psychology. We must never trust the devil. Never imagine that he is smiling; never look at a picture of him by Paul Gustave Doré, or some other artist, and say, “Oh, he’s not a bad-looking devil; perhaps all this is more or less just like Santa Claus and Jack Frost; it’s only imaginary.” Always anticipate any possible attack by watching and praying; for the spirit is willing, but the flesh is terribly weak.

Many a man has lost a fight by being overconfident. Many a businessman has lost a business because he was overconfident. Self-confidence takes our focus off Christ and puts it on ourselves and our abilities, which fall far short in comparison with the devil’s. Our confidence must always be in Christ and His abilities. Whenever we think that we can, we usually end up failing miserably. It is a wise devil that feeds into a person’s confidence in self. The devil is willing to give as much credit to “self” as long as he accomplishes his objective.

Never Underestimate the Power of Prayer

“Watch and pray,” said Jesus, and He practiced it; He won because He practiced prayer and caught the spinning world that sin had thrown out of gear, caught it in the web of His own love and redeemed us by the shedding of His own blood. He did it because He had prepared Himself for that awful, yet glorious, event by prayer the night before, and by prayer in the mountains at other times, and by prayer down the years through His boyhood.

Remember that without prayer, you cannot win; and with it, you cannot lose. Granted, of course, that it is true prayer, and not just the saying of words; and granted that your life is in harmony with your prayer. If you fail to pray, you cannot win. For the Lord gave us the example of anticipatory prayer—getting ready for any event by seeking the face of God in watchful prayer at regular times.