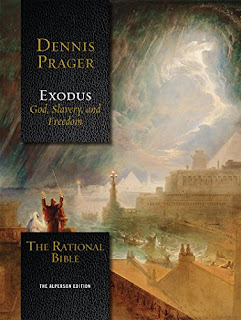 Last August, our congregation and I began studying the second book of the Torah together...the fascinating book of Exodus. I have always had a deep love for the Old Testament, and have lamented the fact that Christians by and large are ignorant of it’s content, focusing at times almost exclusively on the New Testament. This is regrettable. It’s simply impossible to understand the life and teachings of Jesus as well as the rest of the New Testament without some background in that portion of scripture that takes up three-fourths of our Christian Bible. I think everyone who has attended our study of Exodus on a regular basis has found it helpful to his or her Christian faith. At the time I am writing this (April, 2018), we just finished our twenty-sixth week in the book...and we’re only half way!

When I heard that Dennis Prager was writing a commentary on the Torah (the first five books of the Bible) starting with Exodus, my ears perked up. Mr. Prager is a talk-show host who I have been listening to for years, and a man whose views I respect. As one reviewer of his book described him:

Mr. Prager is not a “firebrand conservative” who wants to get you all excited and so that you may go out and shout others down. He is a calm, rational thinker. His mind is his weapon, his intellect is his tool, and his demeanor makes it difficult for a reasonable person to simply dismiss him, let alone dislike him.

I agree with this reviewer completely. This is why I listen to and read after Mr. Prager, as I do few others. He is becoming increasingly influential in our culture, not only through his books and radio show, but through his Prager University videos, which are watched by millions around the world every week. (If you want to get a cogent crash-course in conservative thought...which I would call common-sense thought...I would encourage you to watch any of these on YouTube. Here is a link to his latest video...”An Eye For An Eye”). I would also add that Dennis Prager is a practicing Jew.

Monday, I did something I have only done one other time...I bought a book on the day it was published. (Tuesday, I was fortunate enough to talk to him on his radio show for the first time and congratulate him on opening at #2 on Amazon!) So why would a Christian pastor buy a Jewish commentary and recommend other Christians read it?
Here are three reasons:
I have spent some time reading this book in the last five days, and have finished the first half. I actually skipped to Mr. Prager’s commentary on chapter twenty (the chapter on the Ten Commandments...which we have currently been studying at our church) earlier in the week, as I expected there could be helpful information that I could use in my Wednesday night teaching (which there was!). I intend to continue reading the last half of the book as we progress along in our Bible study. I’m sure it will be a great resource.

So what is my take on this new commentary? And why do I recommend that you purchase and read this book?

Because this book is written by a religious Jew who rejects the deity of Christ (albeit one who respects Christians and defends them frequently), there are many things in the text of Exodus that are obvious to me and other Christians which are not obvious to Mr. Prager and other Jewish teachers. The whole concept of redemption in Exodus, which Mr. Prager deals with as only redemption from Egypt, is sprinkled throughout the book. I believe that redemption in Exodus finds it’s fulfillment in Jesus Christ. This “greater meaning” of Exodus is found in it’s foreshadowing of Christ, who most notably is pre-figured as the Passover lamb (Exodus 12). Jesus, who as “the Lamb of God” who took away the sin of the world (John 1:29), was crucified on Passover as a fulfillment of the Exodus Passover story. As the Hebrews of the Exodus were to apply the blood of the lamb to the doorposts and lentil of the homes in order to escape the death of the firstborn, we are given the opportunity through faith in Christ to apply the blood of “Christ our Passover” (1 Cor. 5:7) to our own hearts in order to escape “the wrath to come.” I and other Christians see many other allusions to Christ in the book of Exodus...which are of course missing from Mr. Prager’s book as well as his theology.

That being said, I believe there is great value to this work...even to believing Christians like myself. Paul in 2 Corinthians calls our New Testament understanding of God “the ministry of the Spirit”. Compared to the Old Testament understanding of God, Paul says this New Covenant is “more glorious” than the teachings of the Old Covenant as revealed in the Torah. Yet, even in this passage, Paul describes the Old Testament teachings (as were taught by observant Jews then and now) as “glorious.” In this same spirit, I would describe Dennis Prager’s commentary on Exodus (especially compared to the drivel which assaults our bookshelves each week) as a glorious work!

Want to read more?  Here are a few recent blog posts from this site you might find interesting...

The Path of Peace

I Went To A Town Hall Meeting...And God Showed Up!

The Question That Led To The Prayer...My Day At The Indiana Statehouse