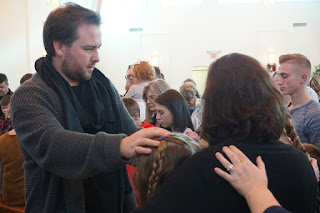 This is the fifth in a series recapping "Waiting 2017".  To read from the beginning of the series, click here.

Anointed Fun… But It Seems Fishy to Me!

As the morning service closed, Pastor Aaron invited anyone who wanted to stay a few minutes after dismissal to hear a children’s song that Pastor Taylor co-wrote with Arnelle Heibling.  I’m so glad I didn’t miss “The Jonah Song!”  It is anointed, scriptural…and just fun!  Get your kids and grandkids and watch and listen to it below…it’s wonderful!

“…And A Little Child Shall Lead Them”

Although many who lived far away had to leave after morning services, many stayed for the afternoon services, which began at 3.  I asked my wife during lunch what she thought about us staying or leaving, as we have 4-5 hour drive and she had to get up about 4:30 in the morning to go to work Monday.  She said, “If God is leading for a service, I don’t want to miss it.”  We were both so glad we stayed!

Pastor Aaron thought that this was not going to be a long service, but God had other plans.  Just a few minutes after the service started, a little seven-year-old child named Boaz, son of Kevin and Amy Heath, got the microphone and said, “Why don’t we just each say what we’re thankful for?”  Well, things just got out of hand after that.  That just started a thankfularama (there’s another new word!).  Husbands started being thankful for their wives, wives for their husbands, children for their parents, and parents for their children.  People got thankful for their salvation and for many other things…I mean really thankful!  How long can you go on just being thankful?  Apparently, a LONG TIME!  And it was wonderful!  Maybe Boaz said it best when he got the microphone back later… “I’m thankful for everything!”  Not all of the afternoon service got recorded, but most of this part did.  If you’ll take the time to watch it below, you might find yourself getting thankful!

Later in the service, a young man who I love and admire stood up and testified.  A young college student from our church named Aaron Hart shared some of his experiences and his appreciation for his pastors.  Aaron has been attending Fair Haven for a couple of years and he is one man who loves Jesus.  As I would share a little later, he has no support from home…yet.  But he and anyone else in his position can start a legacy.  Pastor Aaron was moved by the Holy Spirit to pray for Aaron’s finances, and to ask Missy to pray for Aaron’s mom.  I can’t wait to see what God’s going to do in his life, and the life of his family as a result of prayer.

Aaron and three others from our church were due to leave for Haiti on Monday morning.  He has joined Pastor Mike Douglas and Don and Mary Lou Dicus as well as a group from our sister church in Sarasota, Florida to hand out Christmas presents and the love of God to hundreds of children up in the mountains in the poverty-stricken Caribbean island.  It was on my heart and other’s hearts to gather them together for prayer, sending them in Jesus’ name.  (As I write this, they are on their final day of the trip before returning home tomorrow.  I’ve already heard wonderful things about how God is helping them!)

Several people have spoken, emailed and texted me about what God did for them in the meetings.  Let’s here from some of them:

I had a wonderful conversation this week with John Stefan, who is surely a Prince in Israel…that man, who was once an avowed atheist, is just full of Jesus!  He told me that he was as confirmed in his atheism as Saul of Tarsus was in his Judaism…until Jesus got hold of them both!  He says, “The reason we are here on earth is to fellowship with God!”  John is a man who hears from God, and, during the meeting, Jesus spoke in his heart that He was pleased with the meetings.  When I asked him about what was the highlight of the meeting to him, he related this to me.  “What else is greater than that!”  I can’t think of anything, can you?

John’s wife Barbara shared this with us:

Before the meetings and during the meetings I was in a lot of pain. I’m having an MRI next week plus other tests. The Holy Spirit was moving all thru each service. You had to be there, to feel the Spirit go thru your body. At the very last service, I did not think I would be able to stay because of the pain. Someone was singing a song and there was a line in it about healing. After the song, someone said, let's sing that line about healing and stand up. Well, I hung on to anything I could hold to and stood up with burning feeling from pain. Right after they sang that line, I sat down. Right away I felt my pain go away. To tell you the truth, I was in shock. I kept moving because I wanted to see if it was just in my mind. Praise God, it was not. I was able to sit thru the last meeting without pain!!!!!

(Isn’t that amazing!  It’s interesting to me that, even though we never had a “healing service” in the meeting, and physical healing was never a focus of the meeting, yet people got healed!  In the first meeting on Saturday morning, a woman was healed (Magen Gillihan) and in the last service on Sunday evening, another woman was healed!  I’m sure there were others, but those are the ones we have received testimony about…Praise the Lord!)

“…I have told Pastor Schultze and the girls that everything that was done both on Saturday and Sunday fit together like a hand in a glove. It looked like from the altar call (at the beginning of the meeting until) the thankfulness to close (the meeting)… was all built upon each thing that was done.

The Lord has a way of showing me a person {takes 3 times before I know it is from God} and He showed me the little boy (named Boaz), the little guy the Lord spoke his will through, in sharing about the thankfulness from the people. So I knew he was in order.”

“…there are many wonderful things that come to my mind while reviewing the past weekend. There was such a sweet spirit from the time that we walked in the door. During the meetings you could sense the spirit of overwhelming peace and love. The messages that were given by Pastor Mike and Pastor Aaron were rich… The messages that we got through the testimonies of others were rich as well. In the last meeting when a child said "why don't we just tell what we are thankful for"…What a door was opened with that - Praise the Lord! But also as I was reviewing I became very thankful for what we have at Fair Haven. I feel the same love of Jesus coming from my Fair Haven family and I believe that in our services we try to "wait upon God" to lead us.

I’d like to encourage everyone to tell their story, even if you have written anything for this series, I’d still like to know…Also, if you want to add your testimony, and can add it here in future updates. As the old song says, “Everybody ought to know who Jesus is!”

Pastor Aaron closed these wonderful meetings with a charge to each of us. I asked him to summarize his message, as this was not recorded. What he stated then and what he shares with us now is worth the whole meeting: 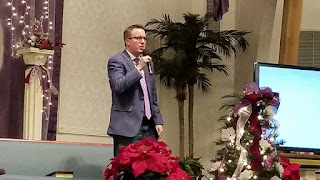 “…When the witness of the Holy Spirit is happening within a believer, it is not OUR witness...It is the Holy Spirit witnessing of Himself! The goal is never to be led, or to seek to be led. The goal is to glorify God, at all times, and in every way. The Lord never leads to exalt us, but to glorify Himself through us. He chooses to work out his Kingdom here on earth through men and women, boys and girls and we get to be a part of it! It’s never been about us, always about Him. The greatest witness of the Holy Spirit is your bible. We must be people of the Word. It is His Word. What a privilege to have access to the Word of the Lord at all times! "

I’d just like to say here personally, that I am thankful to God for Pastor Aaron and Missy. It has been a pleasure and a wonder to see how the Lord has used them, especially in the last couple of years. They are truly sold out for God, and it shows in every act that they do. It was really hard a little over a year ago to see them leave for Parker City, although I knew beyond a shadow of a doubt that it was God doing it…Yet look at what God has done through them since then! Praise His Name!


I’d also like to point out the unsung heroes who work behind the scenes whenever there is a gathering like this. There are some that I don’t even know. I do know a few that I’d like to just give a nod of great appreciation to. Pastor Kim Gilbert videoed most of the meeting. I couldn’t have done these recap blog posts if he hadn’t spent the energy to do this. And I know by experience that when you do something like that, it’s much harder to fully engage in what’s going on because you have a job to do. Also, every time that I went to the kitchen, Janice Gilbert and several other Parker ladies were 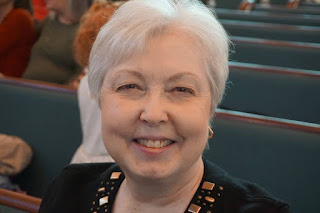 working hard so that we can eat. Thank you thank you thank you! Did you enjoy having the words on the TV screen for us to worship with? Well, I know that Pastor Taylor was responsible for setting up that (and who knows what else). Also, Don Dicus from Fair Haven was the one diligently working on his computer to put the lyrics up on the screen for us. He does the same job every week at our church, and he got drafted to do it for these meetings too. Way to go, Don! Also, thank you Esther Morey for the wonderful photos you took. I poached some of them for these blog posts! I’m sure kudus are in order for many, many others. And as I mentioned in an earlier post, the prayer warriors who prayed incessantly for these meetings are just as important as the “hands-on” folks. God bless each one who had a part!

The Lord has put some things on my heart to share with all of you before I wrap this series up. I'll be concluding this series on Facebook Live sometime early next week, and then I will repost the video on this blog afterwards...see you then!