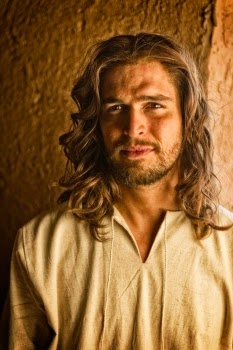 Explanatory note-I've noticed some of the reviews on this series call it a five part series because it shown in five two-hour episodes. For the purposes of these articles, I'm considering each hour as one part.  In this case, the two-hour episode shown last Sunday contained parts 5 and 6.

Conclusion- While the first three parts were largely a disappointment to me, the last three, including Part 4 on Saul and David as well as these two parts, are a huge improvement.  Yes, there are discrepancies even  in these later episodes from the biblical account.  It seems that when the producers are given the choice of being Biblically down-the-line or making a dramatic statement, they often choose the latter.  Some may differ with me, but I would give them some leeway on this.  I heard Jim Daly of Focus on the Family make the point that this is a paraphrase, not a literal translation, and that is certainly true. However, in my opinion the best scenes in this production are the ones that stay true to the bible, but do it in a creative way.  In any event, I'll be watching this Sunday night!


Want to read more?  Here's links to some of my more popular posts:
A Man Of A Different Spirit
Reflections On 30 Years of Marriage-Part 1
Obama's Record-Where We Are After Four Years (written right before the election)
Hosea and the 2012 Election (written right after the election)