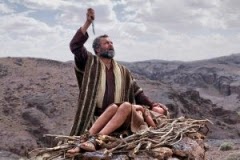 After having watched some clips and reading a few reviews, I was really looking forward to watching "The Bible" Series on The History Channel this month. I was really encouraged by some of the interviews that I had seen by it's creators, Mark Burnett and Roma Downey on their reverence for the Bible and their desire to tell the story of the holy scriptures in an authentic way.  However, after having watched Parts 1-4, my opinion is decidedly mixed.

The Good:
The Bad:


Conclusion-Well, this was an ambitious project, and I'm glad they attempted it.  The fact that the ratings have been through the roof shows how that people today are truly spiritually hungry.  I think it also shows that folks intuitively know that the Bible has something to offer that they're missing in their day-to-day lives.  I would hope that this would spur a new-found interest in the Biblical account, which is times better than anything Hollywood has yet to come up with.  All-in-all, I'm looking forward to the rest of the series!


Want to read more?  Here's links to some of my more popular posts:
Lincoln & Obama-Two Views of Welfare
TR on Lincoln-The Great Statesman
Put It On My Account
Reflections On 30 Years of Marriage-Part 1
Posted by Wayne Nall Jr at 11:24 AM